On this blog, you can find paper addresses in Vienna, Tokyo or Bristol. Quite funnily, I never took the time to share my paper addresses in Paris, where I’ve been living for ten years now (my! Time flies!). It’s time to make things right.

This is in no way a “best-of” list. It’s simply the small and bigger shops I like to visit when I crave for books and stationery, or when I’m having a stroll in certain parts of the city. Old habits, crushes, convenience, there are many reasons these shops stand out for me, and I hope you’ll enjoy it as much as I do.
Each listings comes with its what3words address, and landmarks or nice place to visit nearby. Enjoy!

No need to present the famous English bookstore near Notre Dame (. It’s cute and tiny and it’s a bit of a maze to get lost in, hunting for great English books. However I found that it was less pleasurable to visit the last few years – maybe it’s better to avoid the week-ends when it’s crowded with tourists eager to see this landmark of the Parisian literature scene. And it’s not exactly on the cheap side either. 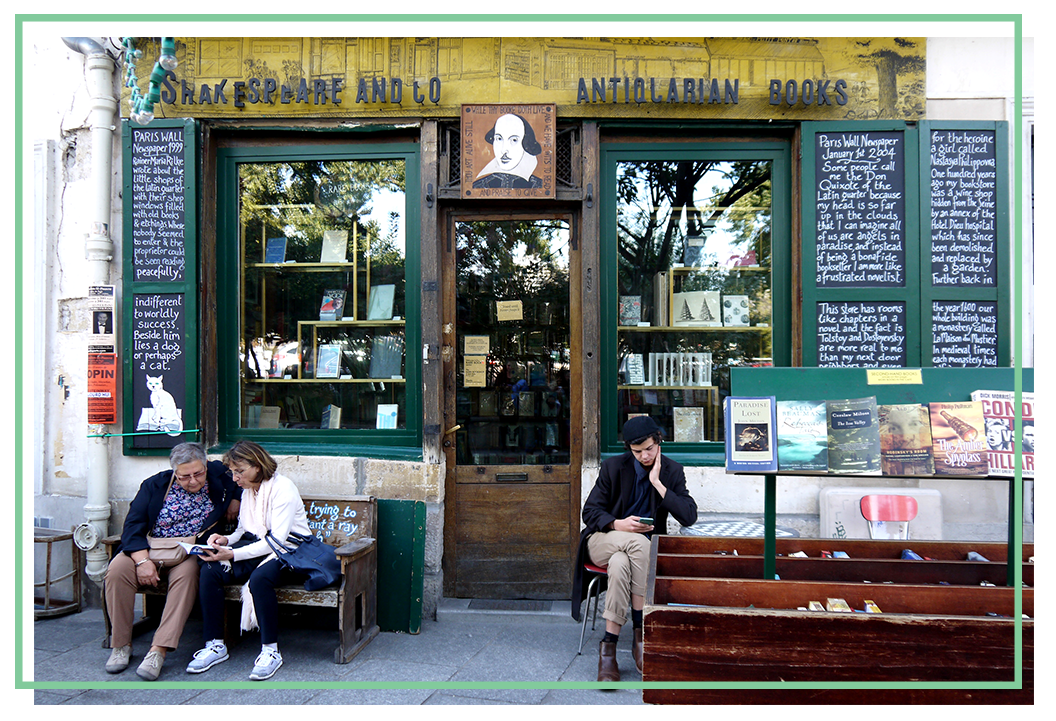 What a better introduction than “the first English book shop established on the continent”? It says it all about Galignani! In addition to a wide range of fiction books, they also have coffee table books, and French books as well. So you’ll be sure to find something to your taste there. And if not, you can still enjoy the heartwarming atmosphere (is it an armchair that I’m spotting at the end of the English literature section?).

Gibert Jeune is a bit of an institution if you’re after books in Paris (or at the time, if you wanted to re-sell it). With several branches across the Saint Michel square ( which could be renamed the Gibert Jeune square actually), they cater for all literary needs. I used to go there to buy cheap English classics (remember that light green £2 collection from Penguin? It was all there). What sets appart Gibert Jeune from other bookstores, is that they also sell secondhand books. Lots of it. So you can usually get good prices for books there.

If Gibert Jeune isn’t enough for you, you can try your luck at the competitor Gibert Joseph (the story says they were brothers), in the same area. It’s the same concept, but a different inventory. More conveniently, they have all their departments in one big building. They also have several branches in the city.

The Saint Germain area is famous for its literary life, with authors meeting at Le Café de Flore to discuss the latest gossip (or was it their greatest theories?). Right next to it, sits L’Écume des Pages. Since I’ve been in Paris, I’ve always considered it to be the quintessence of the Parisian bookstore. Wooden shelves, ladders to reach the many books they sell… it’s always a pleasure to go through their narrow alleys. 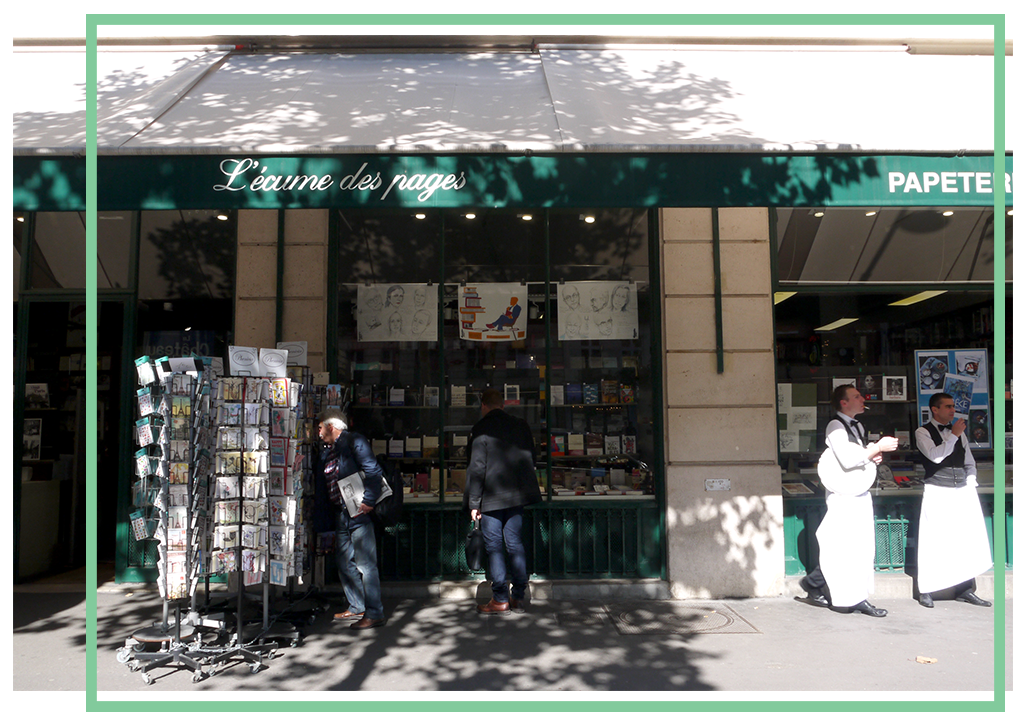 A bit in the same line as Beaubourg’s bookstore, Artazar is an independent bookstore along the pittoresque Canal Saint Martin. You miss it with its bright orange facade. They have quite q edgy selection of art books, and a small Papier Tigre corner (if you can’t make it to their flagship store).

I go there when I need my dose of Great Britain, or when I want to get my hands on the latest Frankie Magazine. The Parisian branch of WH Smith has nothing to be envy to its comrades across the Channel. You’ll get the latest releases, the all time classics (including the Penguin Classics clothbound editions), and a great range of English-speaking magazine. It’s not far from Galignani, and they have an English tea-room — more reasons to pay them a visit (oh, and it’s a few steps from the Concord too).

I’d say even if you’re not into stationery, you should go and have a look at Le Bon Marché, an historical high-end department store in Paris. Le Bon Marché basically invented the concept of department store, and it inspired “Le Bonheur des Dames” by Zola (read it if you haven’t!). The place is quiet and luxurious, and you’ll get a real taste of the French chic and fashion.
On the second floor, they built over the last few years a really qualitative stationery department. It’s not exactly cheap, but you have some real beautiful items over there. Papier Tigre, Le Typographe, Hays and many more brands are available. Their selection goes from new innovative brands to the best of the stationery classics. 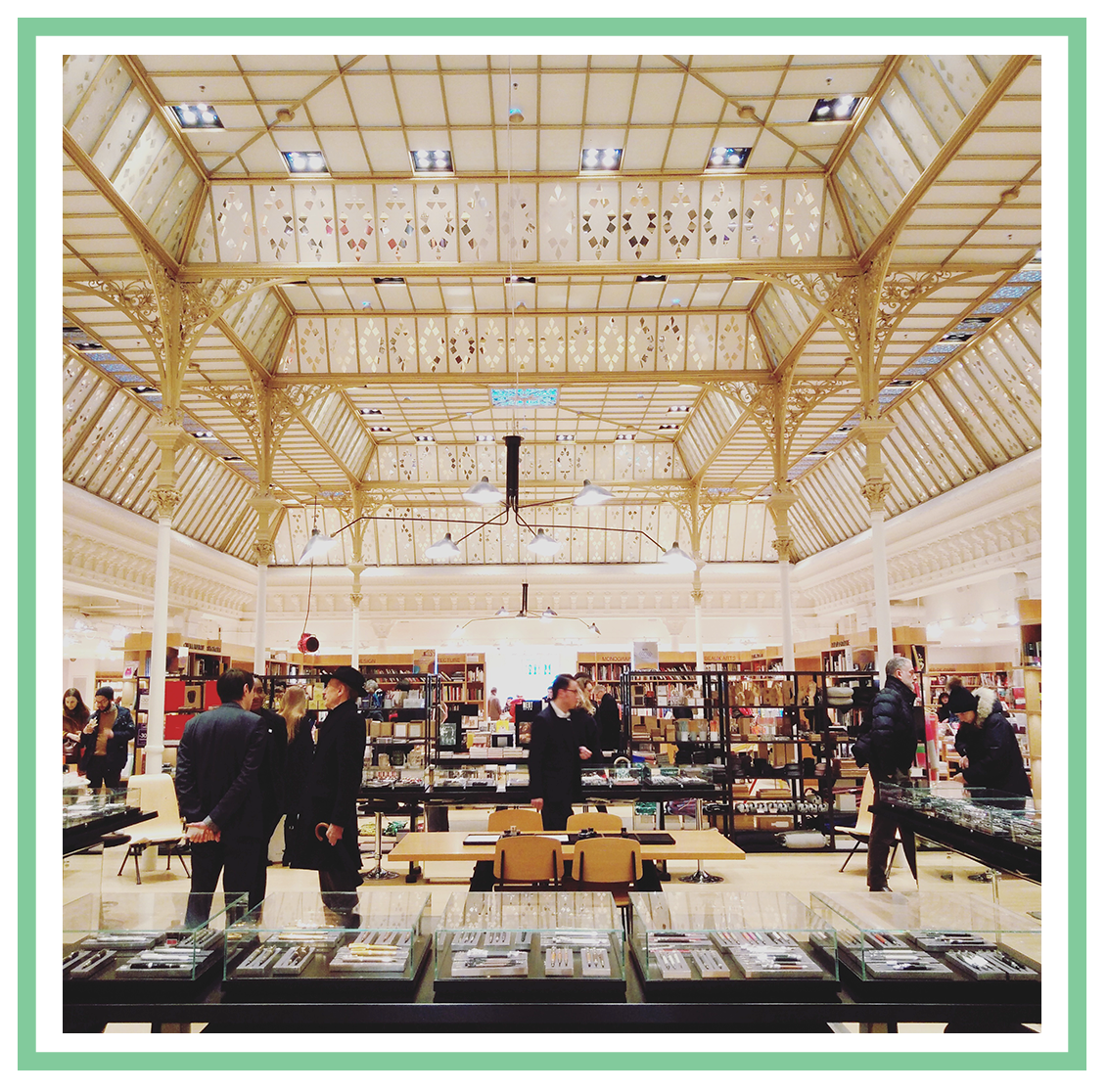 I wrote a short article about the French stationery brand Papier Tigre and how I like their products. Well, they have a shop in Paris, and it’s a delight. They sell all their products of course, but also some of their findings that are perfect for stationery nerds. The shop is bright and nicely decorated with wooden panels and lots of colours – just like their signature notebooks. 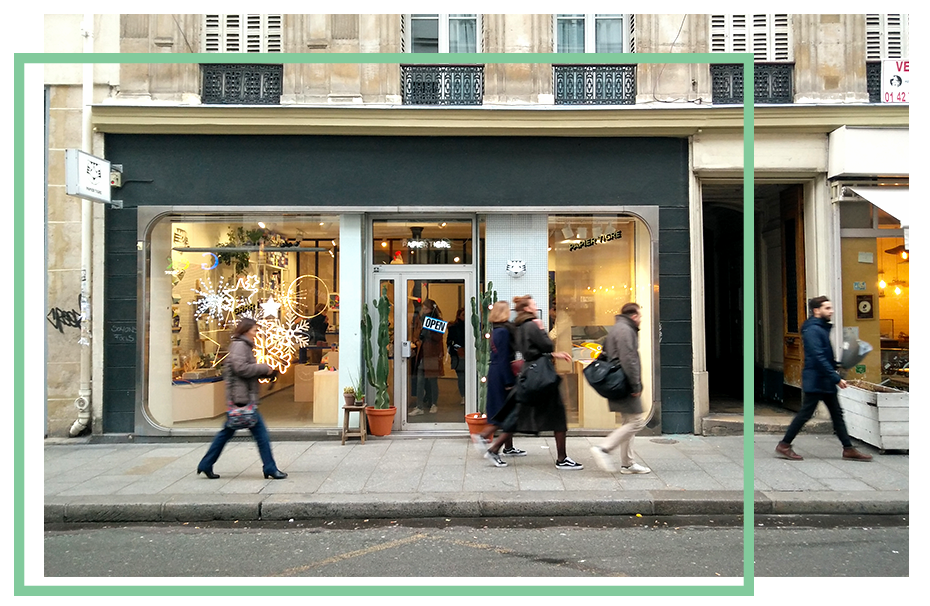 Le Bazar de l’Hotel de Ville (BHV) is another big Parisian department store, right next to the city hall at the very heart of Paris. I’ll have to check if it’s still the case, but some time ago they had a lot of Korean stationery brands, like Paperways for instance. Their big plus: there’s a PaperChase corner within their stationery department. So not only do you a nice selection of stationery, but you can also discover the best of the English brand PaperChase – meaning young and colourful pieces of stationery, as well as everything needed to make nice presents (paper, ribbons, tags, etc.). 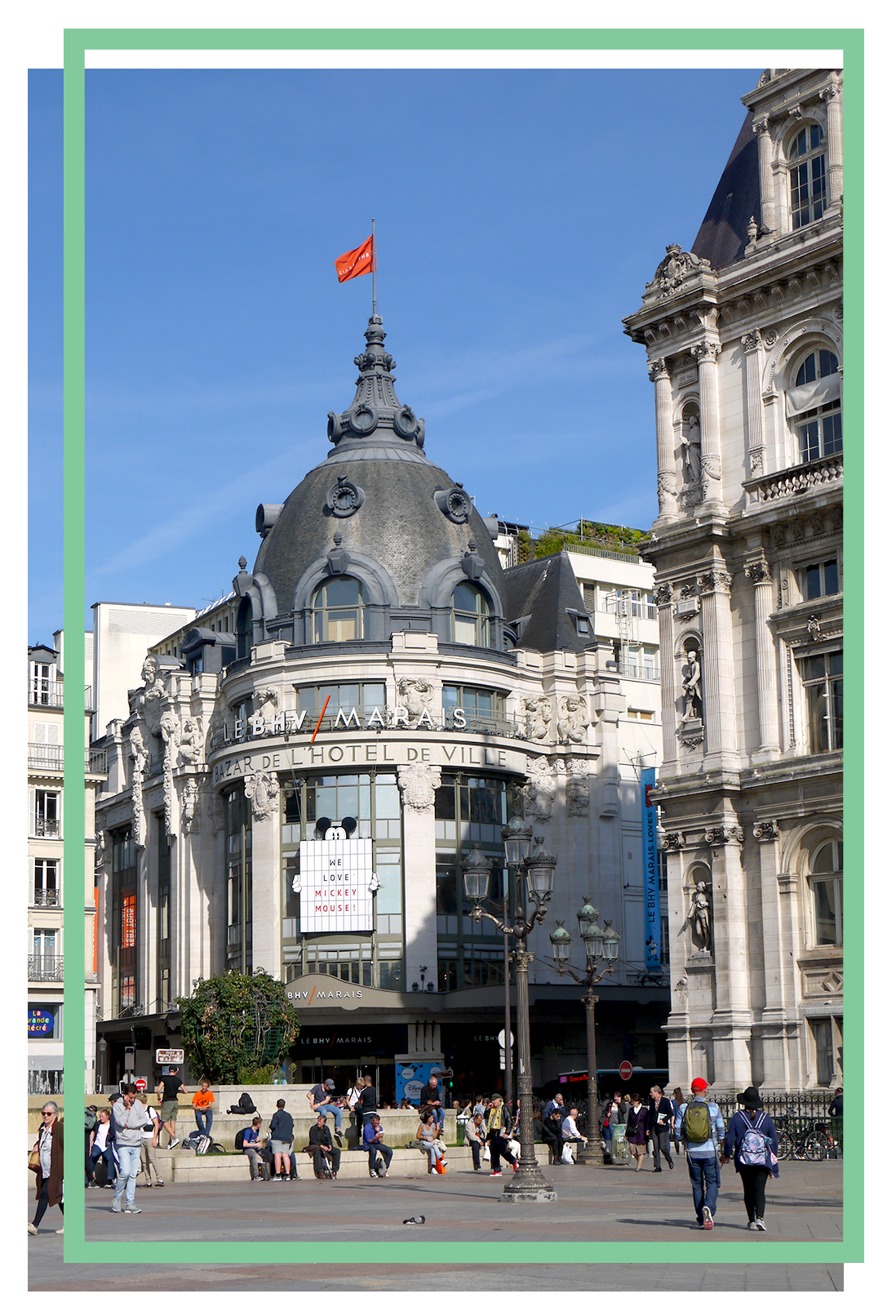 A little bit of Japan in one of the most touristic place of Paris! In the Carré du Louvre, a small shopping mall right below the Louvre museum, the Japanese brand has opened a branch where you can find the best of Japanese stationery —- and not only. If you can’t afford a trip to Japan, here’s a good compromise. 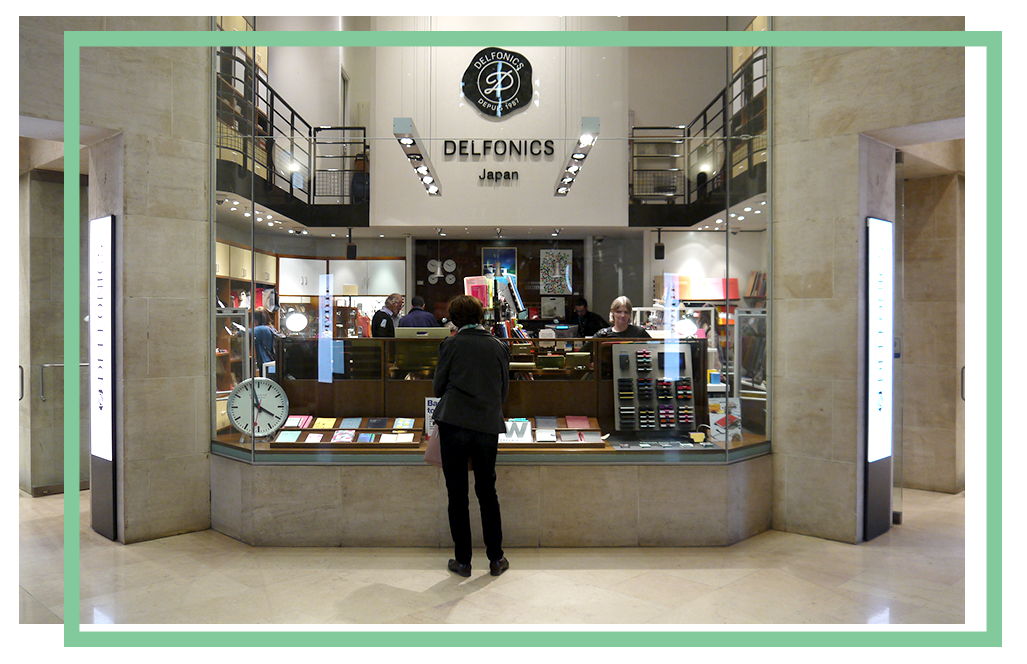 Atelier Nota opened a few years ago in the rue Ramey, a nice street I like in my neighborhood because of its small indie stores , bars and restaurants. Run by two sisters passionate about paper, L’Atelier Nota is filled with a carefully selected range of notebooks and stationery from the best brands. They launched they own range “Rameyttes” (of which I particularly like the beautiful lunar calendar) and organize workshops and exhibitions. If you’re visiting Le Sacré-Coeur, it’s very close, so be sure to pay them a visit. It’s one of my favorite spots as I live nearby and I always have a good excuse to go and check on their new arrivals.

Another “Atelier”, and in the Montmartre area too. This shop showcases the work of Atelier Mouti, a young brand designing wallpapers, stationery and other graphic objets. In a cosy and Parisian atmosphere, you can discover there the brand’s delicate creations and flowery universe. 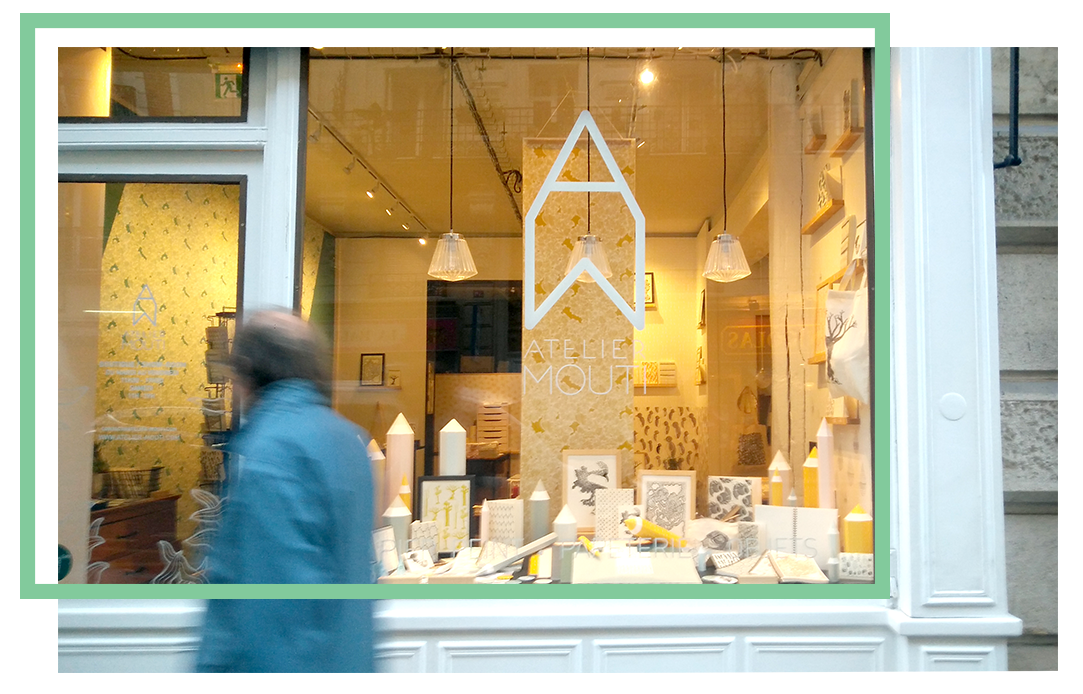 I’ve started a new job recently and my office is near Passage de Choiseul, one of the many typical arcades you can find in the area. Luckily, this one arcade hosts two addresses for the paper lovers.

I’d say Boisnard is a traditional stationery store, by its woody atmosphere and the product they sell, a tribute to quality and craftsmanship: fountain pens, leather goods, and of course gorgeous notebooks. They sell many nice French brands: Les Editions du Paon, Le Papier fait de la Résistance or Le Typographe (ok, this one is Belgian, but it’s fine stationery all the same). And for the book lovers, they offer the stationery range from Gallimard, the iconic French publishing house.

A bit further down the passage, you’ll see Lavrut, a creative store that has been around for a while too. You can get everything for painting and drawing there. Although stationery doesn’t seem their specialty at first, you won’t be disappointed. For the stationery nerds, they offer a lot of Paper Poetry articles (I’d say the full range as they have so many). Next to there’s also a wide selection of Korean stationery, including notebooks from Paperways and Livework. 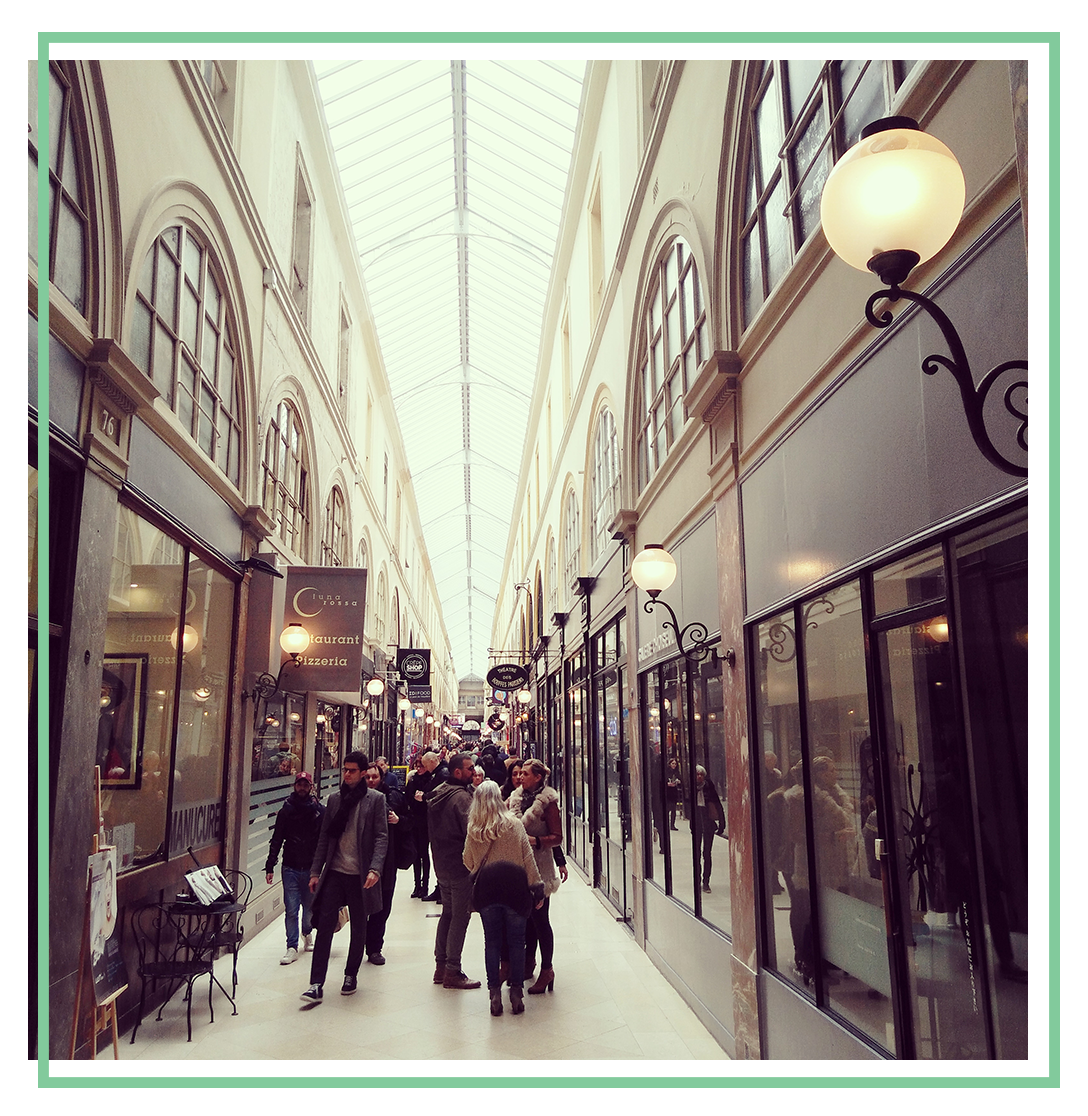 Do you like going to these places? Have you got other nice stationery and books address to share in Paris? Let us know where you go too!

3 thoughts on “Where to shop books and stationery in Paris” 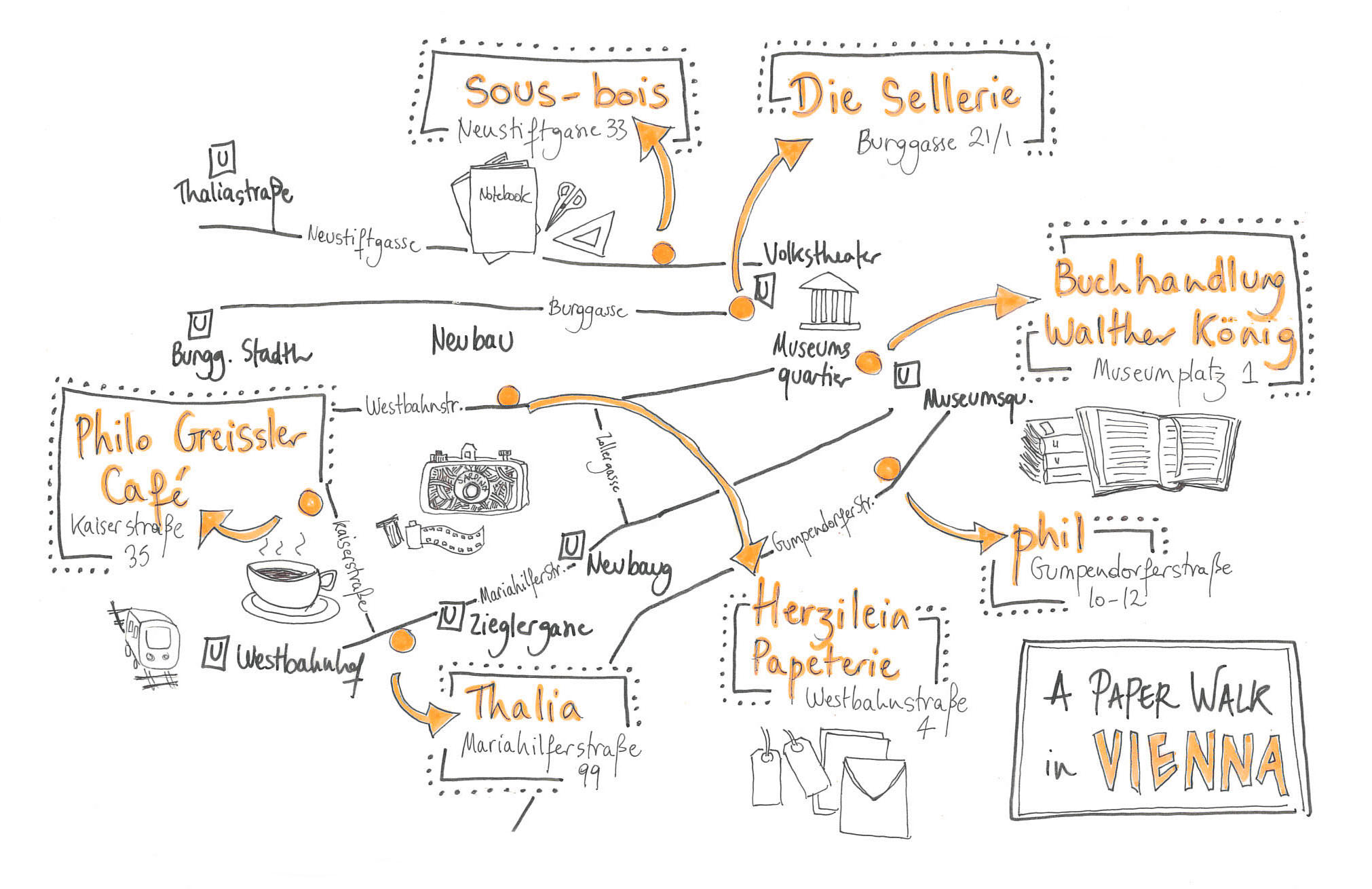 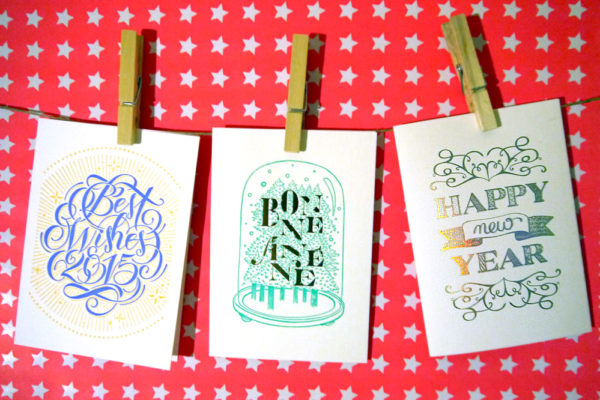